Need for Speed Wiki
Register
Don't have an account?
Sign In
Advertisement
in: Vehicles, Cars, Hyundai,
and 12 more

1424 kg (3139 lbs)
The Hyundai Tiburon GT (also known as Hyundai Coupe V6 in Europe and Hyundai Tuscani in Asia) is a second generation front-wheel drive sports coupe manufactured by Hyundai that is powered by a 2.7L V6 engine.

The Tiburon GT appears in Need for Speed: Underground and is unlocked after completing Underground Mode event #17 - "New Kids in Town".

It has quick acceleration due to being powered by a V6 engine and reaches an average top speed, but is somewhat prone to understeer in corners.

The Tiburon GT appears in Need for Speed: Underground 2 and is unlocked during Level 2 of the career mode after completing the third URL race event.

It has decent acceleration and grip performance. When fully upgraded, it is capable of reaching a high top speed. 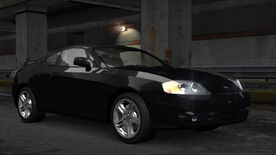 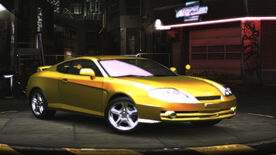