Need for Speed Wiki
Register
Don't have an account?
Sign In
Advertisement
in: Vehicles, Cars, Concept,
and 12 more
English

Hand built in a small workshop at Leonberg, Germany, some of its distinctive characteristics are its long, bullet-like body as well as gull-wing, an external rear-view mirror mounted above the driver's head, a velocity-sensitive electronic active chassis that can lower the ride height by three inches (76 mm), and an electronically controlled airbrake spoiler.

The Commendatore 112i is powered by a customised Mercedes-Benz 6.0L V12 engine, uses headlights sourced from the Porsche 968 and has interior featuring RECARO leather seats.

Its sole produced unit was bought in Switzerland in the late 1990's and underwent a series of modifications which gave the nickname "Silver Arrow" to the modified car, including conventional rear-view mirrors and Mercedes-Benz wheels. Years later, the car would be sold back to Isdera which would restore it to its original state, including the golden BBS wheels.

The Commendatore 112i appears in Need for Speed II as a class B vehicle, and is available from the beginning in all releases. 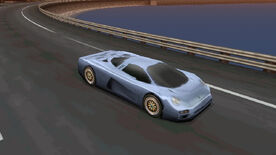