Need for Speed Wiki
Register
Don't have an account?
Sign In
Advertisement
in: Vehicles, Cars, Concept,
and 13 more

1290 kg (2844 lbs)
The Italdesign Calà (also known as the Lamborghini Calà) is a concept car designed by Giorgetto Giugiaro.

It was intended to be an entry-level car, put below the Diablo in Lamborghini's model range. It was also meant as a successor to the Jalpa, which was discontinued in 1988 and had previous studies for a replacement in the form of the early V10 powered P140 concept.

Unveiled at the 1995 Geneva Motor Show, the Calà features carbon fibre body, aluminium chassis, a removable targa roof, and a 2+2 interior configuration, in addition to being powered by a four-litre, 400 bhp V10 Lamborghini engine.

As Volkswagen purchased the company, the project was scrapped. Instead, the Lamborghini Gallardo was introduced as an entry-level model.

The Calà appears in Need for Speed II as a class C vehicle.

It can compete well with the Lotus Esprit V8 due to its sturdy handling. 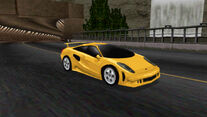 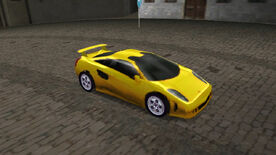