The Italdesign Scighera (also known as the Alfa Romeo Scighera) is a futuristically styled concept car by Italdesign.

The Scighera used many technical components by Alfa Romeo such as its all-wheel drive system and a twin-turbocharged 3-litre V6 engine.

The Scighera appears in the PC release of Need for Speed III: Hot Pursuit as a class A vehicle.

It has quick acceleration and good top speed, although its steering is not as responsive as the Ferrari 550 Maranello or Lamborghini Diablo SV. 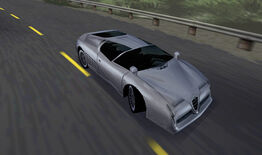