Sean Faris
Stub - Why not help by expanding this article with relevant information.
Jack Rourke is the main protagonist and role that players take on in Need for Speed: The Run. He is portrayed by actor Sean Faris.

He is a marked man running from both the Mob and the Police. He is chased by the police for his street racing offences and vehicle thefts as well as by Mob due to the large debt he owes them.

He enters a massive illegal street racing event called "The Run" with the help of an associate - Sam Harper. He must win the race whilst avoiding the Mob and Police. 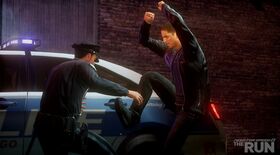