1700 kg (3748 lbs)
Stub - Why not help by expanding this article with relevant information.

The Jaguar C-X75 is a plug-in hybrid supercar that Jaguar unveiled at the 2010 Paris Motor Show. The car was named in honour of Jaguar's history, with 75 standing for Jaguar's 75th anniversary.

The powerplant is a 1.6L I4 engine with both a turbocharger and a supercharger to create 502 bhp as well as two electric motors that provide an additional 390 bhp. Jaguar claims that the C-X75 is theoretically capable of reaching a top speed of 220 mph (354 km/h).

The C-X75 was planned to enter a limited production run with help from the Williams F1 Team but the plan was dropped in late 2012. Five prototype units were built in total.

The C-X75 appears in Need for Speed: Rivals as a racer vehicle and an RCPD unit included with the Simply Jaguar Pack.

The C-X75 appears in Need for Speed: Edge. 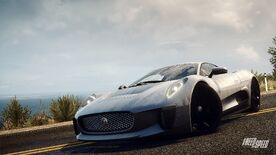 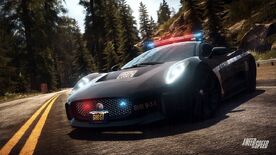 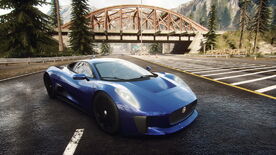 Retrieved from "https://nfs.fandom.com/wiki/Jaguar_C-X75_Prototype?oldid=139227"
Community content is available under CC-BY-SA unless otherwise noted.