Need for Speed Wiki
Register
Don't have an account?
Sign In
Advertisement
in: Vehicles, 2010s, Jaguar,
and 12 more

The V8 S was the highest model designation of the F-Type series, as it boasts a supercharged V8 engine and an active electronic differential. The gearbox is an 8-speed ZF "Sportshift", and the roof folds away and deploys in twelve seconds.

The supercharger contains two Eaton-supplied, four-lobe rotors and a liquid-cooled intercooler. This model was later replaced by the R.

The F-Type V8 S appears in the Chinese mobile release of Need for Speed: Most Wanted (2012), and is only available for online play. 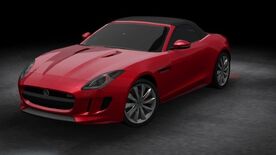