Need for Speed Wiki
Register
Don't have an account?
Sign In
Advertisement
in: Vehicles, Cars, Convertible,
and 11 more

The XK8 was the entry level model of the XK series, whilst the XKR was the top-range model. Both the Aston Martin DB7 and the XK8 are based on the Jaguar XJS.

The XK8 appears in the PC release of Need for Speed III: Hot Pursuit as a class C vehicle.

Compared to the Aston Martin DB7 and Mercedes-Benz SL 600, the XK8 has worse acceleration and top speed. The lack of power is compensated by a controllable and precise steering. 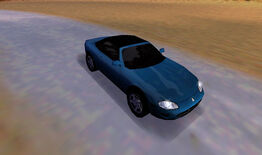