Compared to the older XK X100, the new X150 is a completely new car as it is no longer based on the Jaguar XJS.

It was designed by Ian Callum and was unveiled at the 2005 Frankfurt Motor Show. The XK lineup underwent a facelift in 2009 and 2011.

The XK appears in the Collector's Edition release of Need for Speed: Carbon as a tier 2 Exotic car, which can be purchased for $80,000 in a car dealership.

It is unlocked after completing all three Race Wars challenges in the Collector's Edition section of the Challenge Series.

The XK performs very similar to the Aston Martin DB9 except for a better acceleration and handling.

Regardless of whether the player has the Collector's Edition or not, a red XK will always appear in several of the cutscenes during the career mode. 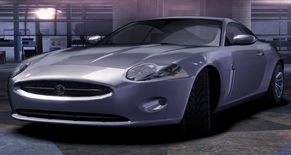 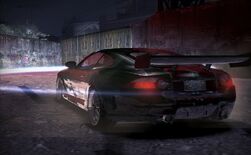 Retrieved from "https://nfs.fandom.com/wiki/Jaguar_XK_(2006)?oldid=139234"
Community content is available under CC-BY-SA unless otherwise noted.