1775 kg (3913 lbs)
Stub - Why not help by expanding this article with relevant information.
The Jeep Grand Cherokee Laredo is a mid-sized SUV made by American car manufacturer Jeep from 1992 to 1998, which was offered with many engines such as V8 and straight-six motors.

In 1996, a model lineup redesign placed the Laredo trim as the base, pushing out SE, with five spoke wheels and body side cladding.

The Grand Cherokee appears in Need for Speed III: Hot Pursuit as a blue traffic vehicle, which can be driven by players in the PC release upon entering the cheat code "go07" at the main menu. 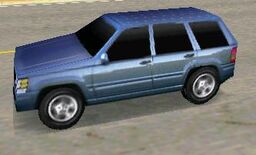