1290 kg (2844 lbs)
The Koenigsegg Agera is a supercar developed by Koenigsegg. It was unveiled at the 2010 Geneva Motor Show and was built to celebrate Koenigsegg's 15th anniversary.

Agera in Swedish means "to act". It is the newest iteration of Koenigsegg supercars and was set to the replace the Koenigsegg CCX.

Design-wise, the Agera has almost the same proportions as its predecessors except for having LED lights and a blue/yellow stripe on the hood.

The 2010 variant of the Agera was never sold, since the production model for the 2011 model year is fitted with a 5.0L V8 instead.

The Agera was made available in Need for Speed: World on January 10, 2012 as an S class vehicle.

The nitrous boost of the Agera is powerful, and its acceleration is slightly better than that of the Koenigsegg CCXR Edition. Its weight and steering are similar to the CCXR's, allowing players to take corners quicky, but with a greater chance of oversteer. Top speed is 216 mph (348 km/h).

The Emerald Green style is a stock cash car that costs

The Agera appears in Need for Speed: Hot Pursuit (2010) as a Hyper Series racer vehicle, and as an SCPD Special Response unit.

It is good at evading SCPD units as well as racing due to its quick acceleration and high top speeds. The Agera has very high performance statistics compared to other vehicles although the car can be a handful due to its difficult controls and twitchy handling. 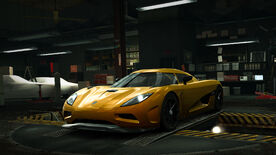 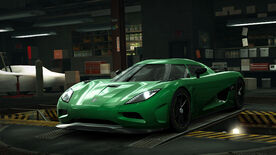 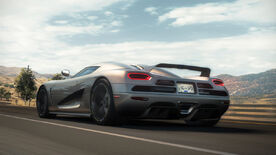 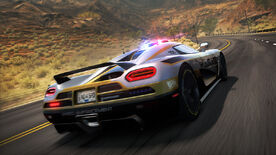