Need for Speed Wiki
Register
Don't have an account?
Sign In
Advertisement
in: Vehicles, 2010s, Koenigsegg,
and 15 more

It debuted at the 2011 Geneva Motor Show with a Thule Roof Box, special Michelin Tyres and a "Speed Racer" themed livery. It was announced as a production vehicle prior to its appearance at the Geneva Motor Show.

The 5.0L twin-turbocharged V8 engine is developed by Koenigsegg and is capable of running on either petrol or biofuel although it will produce more power with the usage of biofuel.

The body of the Agera R is not modified in any form compared to the standard Agera with the exception being a dynamic rear spoiler. Unlike many high-performance vehicles, the rear spoiler of the Agera R does not feature any hydraulics and instead uses the wind flowing over the body to alter its angle.

The Agera R appears in Need for Speed: The Run as a Supercar class car included in the Supercar Pack released on November 15, 2011 for the PlayStation 3 and May 15, 2012 for the Xbox 360.

The stock Agera R requires the Supercar Pack and is unlocked from the beginning of the game. 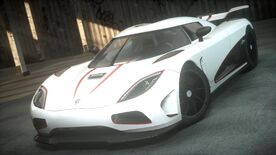