Need for Speed Wiki
Register
Don't have an account?
Sign In
Advertisement
in: Vehicles, 2010s, Koenigsegg,
and 17 more

1-speed
1,628 kg (3,589 lbs)
The 2016 Koenigsegg Regera is an electric hybrid car developed and manufactured by Koenigsegg. Only 80 units will be built, making it the most produced model by Koenigsegg, and each is sold for approximately $1.9 million.

Following its unveiling at the 2015 Geneva Motor Show, the Regera entered production the same month in March 2016.

It's sold by Koenigsegg as the luxurious megacar alternative to their race-like road cars, especially since it is the first car to be produced by the company alongside another at the same time; the Agera RS.

The rear wheels of the Regera are powered by a combination of a 5.0L twin-turbocharged V8 producing 1,800 bhp, a 215 bhp electric motor-generator on the crankshaft, and two rear wheel-shaft mounted electric motors, each producing 241 bhp. All of which is managed by a single gear transmission developed by Koenigsegg, and referred to as the Koenigsegg Direct Drive (KDD).

The Regera appears in Need for Speed: No Limits as part of the "Underworld: Downfall" special event that took place from June 14, 2018 to June 21, 2018. The starting performance rating is 873.

The stock Regera is a hyper class car that requires 60 legendary blueprints to unlock. The blueprints required to unlock the vehicle can be found from various sources:

The Regera appears in Need for Speed: Payback following its appearance during the reveal trailer released on June 2, 2017, where Tyler and Jess steal it from the back of a semi truck operating for The House.

It is unlocked for purchase from the drag and race class dealerships upon completing chapter 6 - Payback.

Marcus "The Gambler" Weir's Regera is stolen by Lina Navarro as part of her double cross against Tyler Morgan during the mission "The Job" in chapter 0 - Prologue, and is delivered to "The Collector" of the House.

During its time under possession of the House, it is fitted with a tamper-proof ECU that was custom-built for the Regera. The unique part was discovered by Rav between getting the car from Jess following the mission "The Highway Heist" in chapter 2 - Desert Winds and it being returned to "The Gambler".

The Regera '16 appears in Need for Speed: Heat following an article published[1][2] on August 19, 2019, revealing it to be part of the game's official car list, and appears in the NFS: Heat Studio app as part of container 6, which was released on September 24, 2019.

It has a customisation rating of three and can be equipped with performance parts. 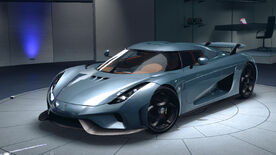 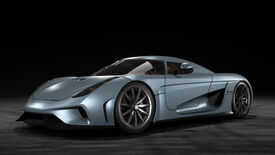 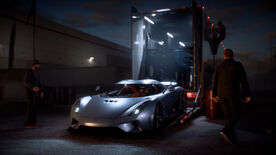 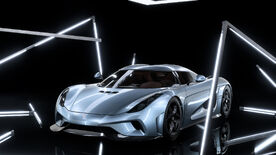 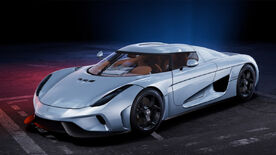