Need for Speed Wiki
Register
Don't have an account?
Sign In
Advertisement
in: Vehicles, 2010s, Lamborghini,
and 14 more

Early design plans for the car were leaked six months earlier by the United States Environmental Protection Agency. There has only been one model of the J variant produced as it is a radical open body design.

A team of designers as well as engineers in Sant’Agata Bolognese, Italy were given the goal of melding the interior and exterior of the Aventador together to create the J variant.

This was achieved with the removal of the roof, windscreen, air conditioning, and radio equipment from the Aventador with the introduction of Lamborghini's patented Forged Composite carbon fibre for seats alongside a hi-tech carbon fibre monocoque chassis.

The Aventador J appears in Need for Speed: Most Wanted (2012) as an Exotic class vehicle included with the downloadable Ultimate Speed Pack.

It is unlocked upon completing 12 events in Exotic class cars in multiplayer, but is available from the start in singleplayer. 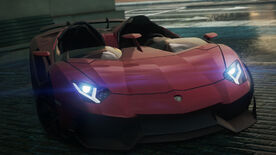