[1]
Stub - Why not help by expanding this article with relevant information.

To differentiate the car from the standard model, the V12's power output was boosted to 710 bhp (720 PS). Additionally, it received an exclusive aero package that features reworked air intakes, splitters, and rear diffusers. Lamborghini claims this change improved the car's aerodynamics by over 50% over the standard model. Claimed performance figure remains identical to the LP 700-4.

Aesthetically, it was given a brand new paintjob and some minor changes to the interior. Production number is limited to 100 units and a Roadster variant exists as well.

The Avendator LP 720-4 50 Anniversario appears in Need for Speed: Rivals as a racer faction vehicle, and was first shown in the AllDrive Feature trailer released on October 18, 2013.

It is unlocked for the racer faction upon the player completing any of the SpeedLists offered at rank 16. Once unlocked, it can be purchased for 235,000

The Avendator LP 720-4 50 Anniversario appears in Need for Speed: Edge. 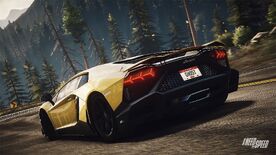 Retrieved from "https://nfs.fandom.com/wiki/Lamborghini_Aventador_LP_720-4_50_Anniversario?oldid=142204"
Community content is available under CC-BY-SA unless otherwise noted.