Need for Speed Wiki
Register
Don't have an account?
Sign In
Advertisement
in: Vehicles, 2010s, Lamborghini,
and 12 more

7-speed Automatic
1,764 kg (3,889 lbs)
The 2016 Lamborghini Centenario LP 770-4 is a limited production supercar based on the Lamborghini Aventador LP 700-4, and was built to commemorate the 100th birthday of Lamborghini's founder; Ferrucio Lamborghini.

The monocoque chassis and body are made from carbon fibre, making it weight 55kg lighter than the Aventador, but is 144mm longer and 7mm taller.

Additional elements - including inlets, large air scoops, and an aggressive diffuser - are based on aerodynamic improvements to body design learnt from developing the Lamborghini Veneno.

A slightly altered V12 utilised in the Aventador was seen fit for purpose in the Centenario, increasing from 690 horsepower to 759.

The Centenario appears in Need for Speed: No Limits as a hyper class car. It was added as part of the 5OKI ft. Steve Aoki (2.10.1) update and has a stock performance rating of 746.

The stock Centenario is a hyper class car that requires 60 legendary blueprints to unlock. The blueprints required to unlock the vehicle can be found from various sources: 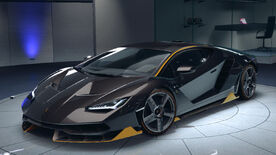