Need for Speed Wiki
Register
Don't have an account?
Sign In
Advertisement
in: Vehicles, Cars, Lamborghini,
and 12 more
English

1625 kg (3583 lbs)
Stub - Why not help by expanding this article with relevant information.

The Lamborghini Diablo VT is an all-wheel drive variant of the Diablo introduced in 1993.

VT, or "Viscous Traction", stood for the drivetrain system in which up to 25% of the power could be transferred to the front wheels when the rear ones lost their grip. This drivetrain was based on the one used in the Lamborghini LM002, although with some alterations.

Other differences between the VT and the regular Diablo included the introduction of newly designed air intakes, revised interior and dashboard, and updated brakes, although a few of these modifications would appear later on the base model.

Similar to the standard Diablo, a spoiler was offered as a factory option.

The Diablo VT appears in The Need for Speed as a class A vehicle.

It is the second strongest and fastest car, although the Ferrari 512TR has better handling, but is not as quick as the Diablo. 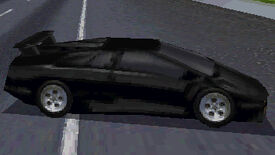