Need for Speed Wiki
Register
Don't have an account?
Sign In
Advertisement
in: Vehicles, 2010s, Lamborghini,
and 11 more

The convertible has similar performance capabilities as the LP 570-4 Superleggera except that it has a heavier mass. This increase in mass is a result of the vehicle's conversion from a coupé body to a convertible body.

The LP 570-4 Spyder Performante was the last Lamborghini Gallardo variant to roll off the production line when production ended in November 2013.

The LP 570-4 Spyder Performante appears in Need for Speed: Most Wanted (2012) as a Sports class vehicle. It was revealed with the release of a screenshot on the official website.

It can be found at various Jack Spots in single player and is unlocked upon reaching SpeedLevel 16 in multiplayer.

It has the best acceleration in the Sports class, with precise steering and good stability at any speed. It is excellent for drifting and useful for losing the cops in pursuits.

Modifications such as lightweight chassis and track tyres can be combined to further improve the well rounded performance of the car to compete against every Most Wanted List rival successfully. 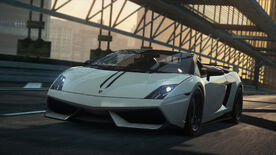