It received several upgrades over the standard model. It had a lowered kerb weight with the usage of carbon-fibre on several parts such as the bonnet, engine cover, rear diffuser, side mirrors, and seats. In addition, revised intake, exhaust, and ECU increased the power output to 523 bhp.

The Gallardo Superleggera appears in Need for Speed: ProStreet as part of the downloadable Booster Pack.

The Gallardo Superleggera appears in the game files of the PC, Xbox 360, and PlayStation 3 releases of Need for Speed: Undercover.

The model is fully customisable with the exception of any bodykits. The model has some parts and an incomplete damage state. 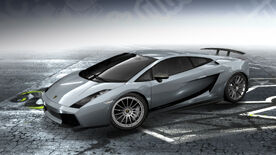 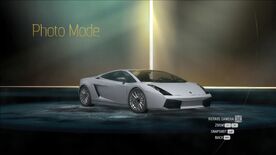 Need for Speed: Undercover
Retrieved from "https://nfs.fandom.com/wiki/Lamborghini_Gallardo_Superleggera?oldid=139559"
Community content is available under CC-BY-SA unless otherwise noted.