It is notable for the increased engine output (641 bhp) of its 6.5L V12 and its unique exterior paint job with a combination of Telesto Grey bodywork and orange Arancio LP 650-4 highlights on the front spoiler and sills.

The LP 650-4 Roadster performs similarly to the LP 640 although with a noticeably more powerful acceleration and more responsive handling. Players can reach a top speed of 216 mph (348 km/h) and 240 mph (386 km/h) with nitrous.

The racer vehicle is unlocked at the beginning of the player's career. It was made available as part of the first free multiplayer update for PlayStation 3 and Xbox 360 released on December 21st, 2010, as well as patch 1.020 for PC on January 20, 2011.

Performance-wise, it is almost identical to the Lamborghini Murciélago LP 640. Since it is available from the beginning, players may find the LP 650-4 Roadster a useful car for their first Exotic series race and pursuit events. 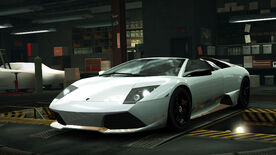 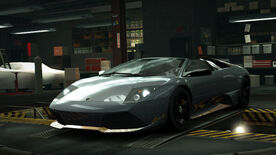 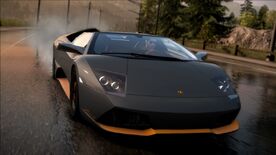