Need for Speed Wiki
Register
Don't have an account?
Sign In
Advertisement
in: Vehicles, 2000s, Lamborghini,
and 26 more

6-speed Sequential
1,665 kg (3,671 lbs)
The 2007 Lamborghini Reventón is a limited-production supercar from Lamborghini based on the Lamborghini Murciélago LP 640 that was first introduced in the 2007 Frankfurt Motor Show.

20 units of the Reventón were sold with each one painted in Grey Barra and fitted with black five spoke alloy rims. Its design was inspired by "the fastest air planes" such as the F-22 Raptor.

A Roadster variant of the car was revealed at the 2009 Frankfurt Motor Show with an uprated version of the 6.5L V12 engine.

References to the Reventón are present in the game files of the PC, PlayStation 3, and Xbox 360 releases of Need for Speed: Undercover, but only in build 1.1.2.1[1][2], although there is no mesh resembling the car present in the game.

The Reventón appears in Need for Speed: Shift as a tier 4 car with a price tag of $580,000 and a 13.00 car rating. It is unlocked for purchase upon collecting 180 stars. Similar to other tier 4 cars, the Reventón cannot be given body or engine modifications.

Despite its low performance rating, it can keep up with the tier 4 competition. Its all-wheel drive handling acts precisely in corners and allows the Reventón to stay stable at high speeds.

The Reventón appears in Need for Speed: Nitro as a class A exotic vehicle. It is rated 5 in speed, 4 in both acceleration and drifting, 3 in handling, and 2 in strength. It can be seen in both the game's cover art and opening video.

Jawad, the top racer in Dubai, drives a Reventón in all the location's Gold Cup race events except for the Drift Challenge, Time Attack, and Speed Trap events. In addition, Jawad's Reventón can also be seen in his profile video, albeit with stock grey paint and without his unique livery.

Jawad's Reventón can be unlocked as a collectable car for use in both Arcade Mode and Career Mode, once all stars are obtained in all Dubai Gold Cup events.

The Reventón was made available in Need for Speed: World on September 14, 2012 as an A class vehicle.

It is very similar to the Lamborghini Sesto Elemento with the differences of a greater mass and superior nitrous boost. Both are comparable to that of any variant of the Lamborghini Murciélago. It is effective in both races and pursuits although it is less powerful than the Pagani Zonda Cinque.

The only wide-body kit it was given was previously featured in Shift 2: Unleashed.

The "Fortune" style is a holiday themed car that costs

The "Megabloks" style is an unreleased variation included as part of a disbanded Need for Speed and Megabloks promotion.

It is fitted with various tuned quality performance parts and various aftermarket parts.

The Reventón appears in Need for Speed: Hot Pursuit (2010) as an Exotic Series racer vehicle, and as an SCPD Speed Enforcement unit.

The racer vehicle is unlocked as part of the SCPD Rebels pack for the PlayStation 3, Xbox 360, and EA Crew releases. The SCPD unit is unlocked upon the player earning a total of 727,500 cop bounty.

Along with the Pagani Zonda Cinque, the Lamborghini Reventón is one of the fastest Exotic cars. It can hit a high top speed and is capable of performing long drifts without any difficulties, and can sustain a lot of damage in Hot Pursuit events as well.

The Reventón "Police" has an A 1850 performance rating and 3.96 handling rating. Players that registered their copy of Need for Speed: Hot Pursuit (2010) can purchase a Lamborghini Reventón with a police livery for $1,250,000 in the dealership.

The Reventón 2007 appears in Need for Speed: Edge with an SS class performance rating.

The Reventón appears in Need for Speed: Hot Pursuit Remastered as a car tier 4 vehicle available to cops and racers.

It is one of the fastest cars in its tier, with a high top speed, is capable of performing long drifts without any difficulties, and can sustain a lot of damage in Hot Pursuit events as well.

The Reventón is a Exotic Series racer unlocked upon earning 1,513,750 racer bounty. 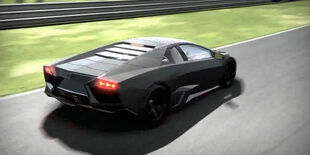 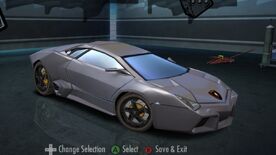 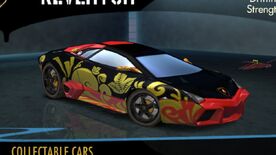 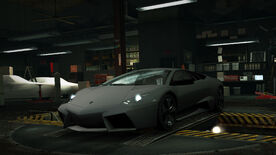 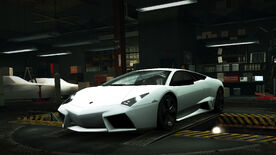 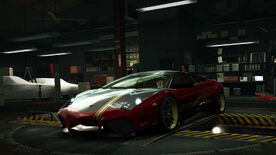 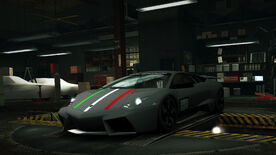 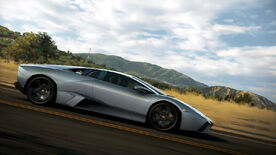 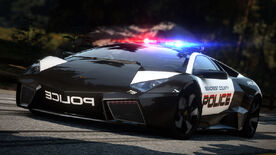 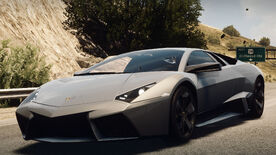