Need for Speed Wiki
Register
Don't have an account?
Sign In
Advertisement
in: Vehicles, 2000s, Lamborghini,
and 14 more

6-speed Sequential
1,690 kg (3,726 lbs)
Stub - Why not help by expanding this article with relevant information.

The Roadster model differs technically from the coupé with a more powerful version of the 6.5L V12 engine that was used in the Murciélago LP 670-4 SV.

Lamborghini produced a total of 15 units of the Roadster and deliveries began in October 2009.

The Reventón Roadster appears in Need for Speed: Hot Pursuit (2010) as an Exotic Series racer vehicle.

The racer vehicle is unlocked upon the player earning a total of 968,750 racer bounty.

It handles and performs identically to the coupé and is not available as an SCPD unit.

The Reventón Roadster appears in Need for Speed: Hot Pursuit Remastered as a car tier 4 vehicle available to racers.

It performs very similar to the coupé Reventón, but is not available as an SCPD unit.

The Reventón Roadster is a Exotic Series racer unlocked upon earning 968,750 racer bounty. 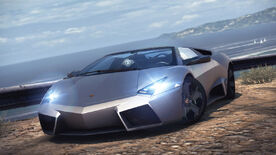