Need for Speed Wiki
Register
Don't have an account?
Sign In
Advertisement
in: Vehicles, 2010s, Land Rover,
and 16 more

Having entered first-generation production in 1983 as the Land Rover One Ten, it was manufactured by British Leyland with development deriving from the earlier Land Rover Series III, which had been in production since 1948.

In 1989, production moved to the Rover Group with the second-generation One Ten being rebranded the Defender 110 in 1990 alongside the introduction of the Land Rover Discovery, and to avoid confusion with the Range Rover brand.

Production of the second-generation model continued as the Rover Group was taken over by BMW in 1994, with the brand being sold off to Ford in 2000, and then reuniting with Jaguar in 2009 for the first time since being under British Leyland in 1968.

The 2011 refresh is the final update for the then nearly 30 year old design, that included multiple alterations such as the usage of Ford's Duratorq engine, a diesel particle filter, and the reintroduction of the soft top option.

The final refresh was in order to make way for the Defender's replacement which is due for release from late 2018 to early 2019.

The Defender 110 Double Cab Pickup appears in Need for Speed: Payback following an accidental usage of a text string that was shown as part of a promotional screenshot released on August 22, 2017[1], but was quickly replaced with a similar image. It later appeared in the Welcome to Fortune Valley trailer[2] released on September 26, 2017.

It is unlocked for purchase from the off-road and runner class dealerships upon completing chapter 1 - Ignition.

It is also offered as one of the two off-road class starter cars.

The Shark Attack edition is unlocked upon successfully delivering it to Rav at his airfield during its rotation period as an abandoned car.

It has a customisation rating of three and can be equipped with performance parts. 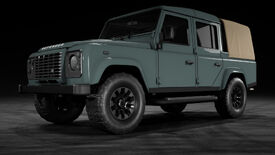 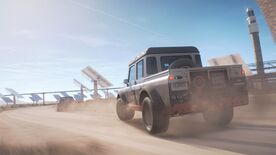 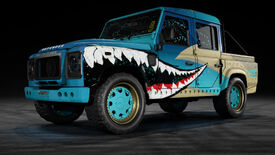 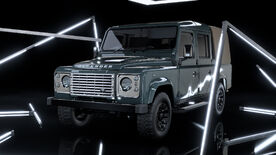 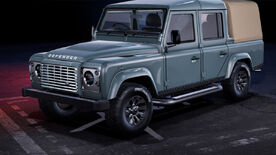