Need for Speed Wiki
Register
Don't have an account?
Sign In
Advertisement
in: Vehicles, 2000s, Lexus,
and 15 more

8-speed Automatic
1,690 kg (3,726 lbs)
The 2008 Lexus IS-F is a high-performance variation of the IS line featuring a 5.0L V8 engine producing 416 horsepower. It was the first car produced by the sport-oriented F division of Lexus.

The IS-F is designed to compete with other sporty sedans such as the Audi RS4, BMW M3, and Cadillac CTS-V.

In 2012, Lexus updated the IS-F with a series of technical revisions including a limited-slip differential and redesigned exterior.

The IS-F appears in Need for Speed: Undercover as a tier 2 vehicle that is unlocked upon reaching wheelman level 9 and can be purchased for $167,500.

The top speed with stock performance is 222 mph (358 km/h), which is identical to that of the Lamborghini Gallardo LP 560-4. It corners surprisingly well for its size and is durable in pursuits.

A diecast edition IS-F can be unlocked by entering the cheat code "0;6,2;" in the cheat menu.

The IS-F was made available in Need for Speed: World during the sixth closed beta session on June 28, 2010 as a tier 2 vehicle. Since August 22, 2012 it has been featured as a D class car.

It has a top speed of 158 mph (255 km/h) and a decent acceleration. However, it is also featured with several disadvantages; The nitrous produces poor speed boosts and its handling suffers from severe understeer. On February 7, 2012, the car received a retune where its performance was upgraded and a seventh gear was added.

The steering has a vague precision, which forces the player to brake in most corners to avoid contact with the wall. The handling is insufficient for competitive races, as many similarly ranging cars such as the Lexus IS 350 can easily outmatch it. It is more suited for Pursuit Outrun and Team Escape events.

Before August 22, 2012, it could only be purchased if the player was at Driver Level 20 or above and cost

"The Beauty" style is a holiday themed car that costs

It is fitted with tuned quality Gromlen performance parts, 2-star Skill Mods, a selection of aftermarket parts, and a female driver.

The IS-F appears in Shift 2: Unleashed as a Modern Road vehicle with a performance index rating of C 740 and handling rating of 3.10. It can be purchased for $45,000.

The V8 engine of the IS-F provides a lot of power and thus enables good acceleration times. It is capable of lower corner entry speeds than smaller two-door vehicles, but does feel controllable despite having a heavy mass.

By applying a Works upgrade on the car, it gets a massive increase in performance, like every other vehicle. If the player swaps the V8 engine with the V10 of the Lexus LFA, the IS-F gets a very quick acceleration at the cost of handling, which becomes more loose in cornering. 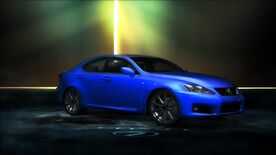 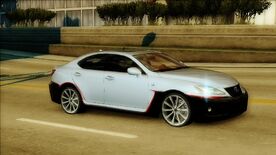 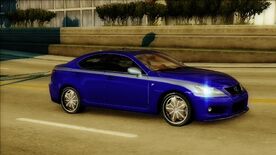 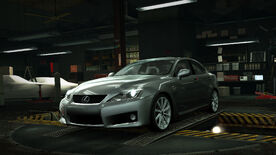 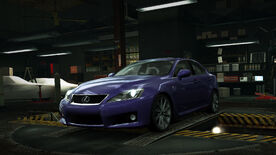 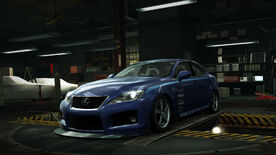 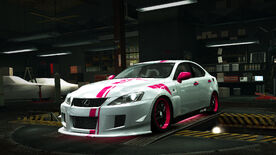 Need for Speed: World
("The Beauty") 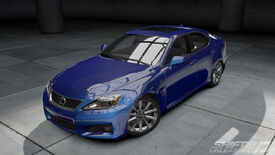