1890 kg (4167 lbs)
The Lincoln MKX is a crossover SUV manufactured by Lincoln, and is the second generation model in the MKX range.

The second generation model entered production in 2015 following its concept being unveil at the 2014 Bejing Auto Show, and a later production model being shown at the 2015 Detroit Auto Show.

Additions to the MKX range include the use of Ford's EcoBoost V6, integral link rear suspension, adaptive power steering, and a 360o camera system.

The MKX appears in Need for Speed: Edge. 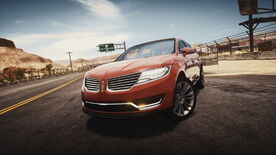 Retrieved from "https://nfs.fandom.com/wiki/Lincoln_MKX_(Gen._2)?oldid=139774"
Community content is available under CC-BY-SA unless otherwise noted.