It is powered by a 3.5 liter V8 from the Lotus Esprit V8, and only one model of the road version was built to meet homologation requirements. The Elise GT1 competed in the 1997 FIA GT Championship with mild success.

The Elise GT1 appears in Need for Speed II as a class A vehicle .

Even though its handling is one of the best in the game, it quickly loses ground at high speeds to the McLaren F1 and Ferrari F50. It is best suited for beginners and for slow tracks with tight corners. 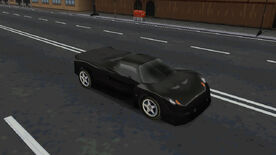 Retrieved from "https://nfs.fandom.com/wiki/Lotus_Elise_GT1?oldid=142254"
Community content is available under CC-BY-SA unless otherwise noted.