1343 kg (2961 lbs)
Stub - Why not help by expanding this article with relevant information.
The Lotus Esprit V8 is a 2-door, rear-wheel drive, mid-engine sports car from Lotus that was introduced in 1996 and remained in production until 2004.

It has a 3.5L-litre twin-turbo V8 powertrain and is represented as the fifth generation of the Esprit.

The Esprit V8 appears in Need for Speed II as a class C vehicle. It has a low top speed, but is balanced with precise handling and effective brakes.

The Esprit V8 appears in Need for Speed: Edge. 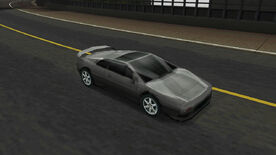 Need for Speed: Edge
Retrieved from "https://nfs.fandom.com/wiki/Lotus_Esprit_V8?oldid=136929"
Community content is available under CC-BY-SA unless otherwise noted.