Need for Speed Wiki
Register
Don't have an account?
Sign In
Advertisement
in: Vehicles, 2010s, Lotus,
and 13 more

It is an upgraded variant of the Lotus Exige Sport 380. Performance of the car remains largely the same as the Sport 380, but it features more aero components and a larger rear wing to produce more downforce at high speeds.

The improvements in speed compared to its predecessor, is a result of most of its body being made out of carbon fibre.

The stock Exige Cup 380 is a classic sports class car that requires 35 epic blueprints to unlock. 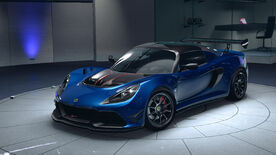