1104 kg (2434 lbs)
The Marussia B2 is a mid-engined sports coupé manufactured by Marussia Motors and is a cosmetic-only alternate variant of the B1. It was first unveiled at the 2009 Frankfurt Motor Show.

The B1 and B2 are the first Russian built sports cars ever made and are fitted with Cosworth engines. Both cars were planned to be produced in a limited quantity. A 2,999 unit production run was planned for the B1 and the B2's production was set to be capped at 500 units.

The B2 was planned to enter production in early 2013 under cooperation with Valmet Automotive in Finland, but the plan did not materialise and Marussia Motors ceased to exist in April 2014.

The biggest advantage the B2 has over most class A cars is handling. It is very responsive and does not tend to fishtail at any speed. This makes the B2 more effective in corners than any class A Porsche and even the Lotus Elise.

Acceleration is another strong trait of the vehicle, as it is up to par with any high-performance class A car. Its nitrous boost is average, but can be improved with skill mods.

The B2 appears in Need for Speed: Most Wanted (2012) as a Sports class vehicle following its reveal during a gameplay demo at EA's 2012 Gamescom Conference.

It was officially revealed to be featured on August 29, 2012 on the official Need for Speed Facebook feed.

It can be found in various Jack Spots in singleplayer, and is unlocked in multiplayer upon reaching SpeedLevel 34.

The overall performance of the B2 is among the best in the Sports class due to a quick acceleration and a high top speed. Its outstanding straight-line performance does come at the expense of handling in comparison to the Nissan GT-R Egoist and other nimbler cars.

The B2 appears in Need for Speed: Rivals as an RCPD unit.

The patrol specification of the B2 is unlocked upon completing the rank 3 assignment - "Taught A Lesson".

The undercover specification of the B2 is unlocked upon completing the rank 3 assignment - "Real Force".

The enforcer specification of the B2 is unlocked upon completing the rank 3 assignment - "Into Turmoil". 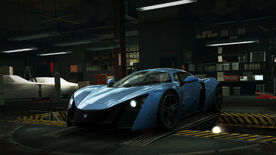 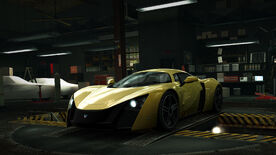 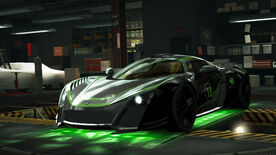 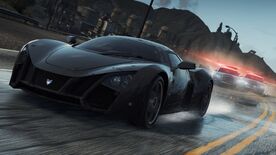 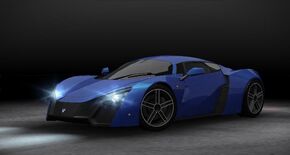 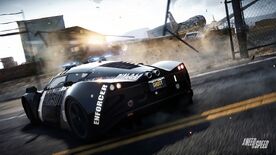 Retrieved from "https://nfs.fandom.com/wiki/Marussia_B2?oldid=144369"
Community content is available under CC-BY-SA unless otherwise noted.