Need for Speed Wiki
Register
Don't have an account?
Sign In
Advertisement
in: Vehicles, 2000s, Maserati,
and 15 more

6-speed Automatic
1,980 kg (4,365 lbs)
Stub - Why not help by expanding this article with relevant information.

The GranCabrio is Maserati's first four seater convertible. It was first unveiled at the 2009 Frankfurt Motor Show and went into production in 2010 at the Vaile Ciro Menotti Maserati factory.

The GranCabrio appears in Need for Speed: Hot Pursuit (2010) as a Performance Series racer vehicle.

The racer vehicle is unlocked upon the player earning a total of 50,000 racer bounty.

The GranCabrio is one of the slowest cars in its class due to underpowered acceleration and a low top speed. Its handling also feels sluggish in corners but these traits are compensated by excellent durability.

The GranCabrio appears in Need for Speed: Hot Pursuit Remastered as a car tier 2 vehicle available to racers.

It performs very similar to the coupé GranTurismo S, but is not available as an SCPD unit.

The GranCabrio is a Performance Series racer unlocked upon earning 50,000 racer bounty. 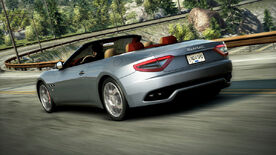