1990 kg (4387 lbs)
The Maserati Quattroporte Sport GT S is a grand tourer based on the fifth generation Quattroporte platform from Maserati.

In 2007, the car first went into production as a sportier variant of the Sport GT. Compared to this counterpart, the GT S has 30 bhp more, new rear wheels improving grip, new interior changes, and updated brakes.

The Quattroporte Sport GT S is built on the same platform as its coupe and convertible counterparts the Maserati GranTurismo Convertible and the Alfa Romeo 8C Competizione.

The Quattroporte Sport GT S appears in Need for Speed: Hot Pursuit (2010) as a Performance Series racer vehicle, and as an SCPD Highway Patrol unit.

The racer vehicle is unlocked as part of the SCPD Rebels Pack for the PlayStation 3, Xbox 360, and EA Crew releases. The SCPD unit is unlocked upon the player earning a total of 338,750 cop bounty.

Due to itd durability, it can be effective in pursuits. 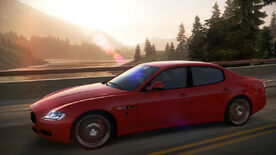 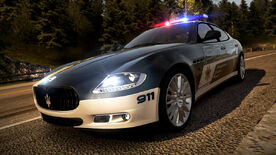