Need for Speed Wiki
Register
Don't have an account?
Sign In
Advertisement
in: Vehicles, Cars, Race Car,
and 13 more

1200 kg (2646 lbs)
Stub - Why not help by expanding this article with relevant information.

The Matech Ford GT GT1 is a race car based on the Ford GT by Matech Concepts. It was built to compete in the FIA GT1 Championship.

It is the second racing version of the Ford GT created by Matech, who previously worked on a GT3 version. It uses a 5.5L "Cammer" V8 engine.

The GT GT1 appears in Shift 2: Unleashed as a Modern GT1 classed car with a price tag of $620,000. Its livery is also used by the #5 Matech Competition Ford GT1.

The car has a performance index rating of A 1810 and 5.07 handling rating. 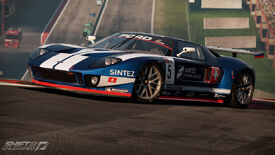