Need for Speed Wiki
Register
Don't have an account?
Sign In
Advertisement
in: Vehicles, 2000s, Mazda,
and 12 more

It was revealed by Mazda on December 27, 2007 and debuted at the 2008 North American International Auto Show in Detroit, with a number 55 livery paying tribute to the Mazda 787B.

Powered by a heavily modified R20B Renesis 3-rotor engine, that produces 450 hp (336 kw), it was specially designed to use British Petroleum's E100 ethanol fuel. Teamed with its Courage C65 chassi and carbon-composite body, it was closer to a prototype than a concept car, with it being tested at various tracks including Laguna Seca and Buttonwillow.

In September 2013, it was revealed that the car had been destroyed during a test drive for Top Gear magazine on August 19, 2008. It caught fire following it cresting a hill at Bentwaters Parks and shifting down through its gears for a turn. The driver at the time, Mark Ticehurst, was able to exit the car before it was engulfed in flames.[1]

The charred remains of the Furai were transferred to Mazda’s Advanced Design Studio in Irvine, California.

The Furai Concept 2008 appears in Need for Speed: Edge with an S class performance rating. 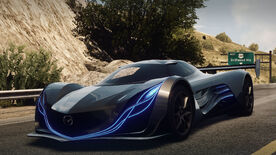 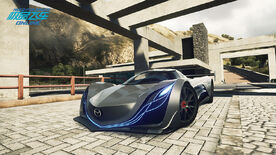