Need for Speed Wiki
Register
Don't have an account?
Sign In
Advertisement
in: Vehicles, 1990s, Mazda,
and 15 more
English

Mazda removed the pop-up headlights due to pedestrian safety risks and no longer rebadged the car as the Eunos Roadster in Japan.

The 1.8L inline-4 engine from the first generation was kept for this generation but with minor revisions including a variable intake control system which increased the power output.

The NB model generation underwent a facelift in 2000 and was replaced in 2006 by the NC generation.

The MX-5 appears in Need for Speed: Underground and is available from the beginning of Underground Mode. It is one of the quickest starter cars although the Honda Civic Si has a higher top speed.

Due to being a lightweight rear-wheel drive roadster, the Mazda MX-5 is one of the most competitive cars in the game. Its lack of top speed is compensated by its outstanding handling and quick acceleration.

The MX-5 appears in Need for Speed: Underground 2 and is unlocked at the beginning of the game.

Its light chassis gives it quick acceleration and strong handling traits, allowing it to outperform more powerful cars in corners. Regular upgrades make it competitive throughout the career mode.

It is best used in Circuit, Street X, and Drift events. It is less suitable for Drag due to a low top speed.

The MX-5 appears in Need for Speed: Underground Rivals and can be purchased for $19,000. 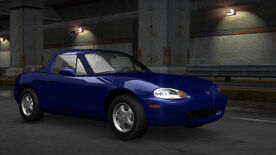 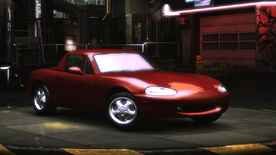 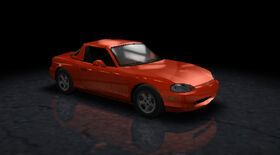