It was fitted with various variants of the MZR inline-four engine series. In 2006, Mazda introduced a performance model, known as the Mazdaspeed3.

The Mazda3 appears in Need for Speed: Most Wanted 5-1-0 that is unlocked from the beginning and can be purchased for $18,000.

A modified Mazda3 is driven by Blacklist Racer # 14 - Taz. It features a widened body kit and a pronounced flame vinyl colour scheme, similar to Taz's Lexus IS 300.

The Mazda3 can be found in the game files of Need for Speed: Carbon. The model can be customised, but does not feature any body kits, refined performance, Autosculpt parts, interior, or wheels. 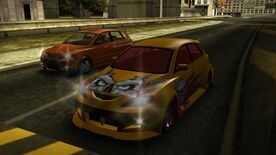 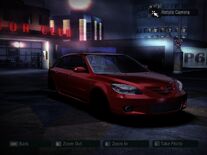 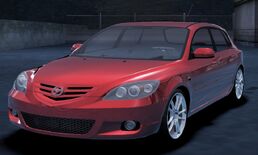 Need for Speed: Carbon
Retrieved from "https://nfs.fandom.com/wiki/Mazda_Mazda3_(BK)?oldid=140017"
Community content is available under CC-BY-SA unless otherwise noted.