Need for Speed Wiki
Register
Don't have an account?
Sign In
Advertisement
in: Vehicles, Cars, Mazda,
and 20 more
English

1621 kg (3574 lbs)
The Mazdaspeed3 (also known as Mazda3 MPS in Europe) is a high-performance variant of Mazda's Mazda3 hatchback.

Powered by a 2.3L turbocharged I4 engine, the Mazdaspeed3 is designed to compete with other hot hatches such as the Volkswagen Golf GTI (Mk5).

It was first produced in 2007, with production ending in 2009. A successor was released in 2010, powered by the same engine, but with a new exterior design.

The Mazdaspeed 3 appears in Need for Speed: Carbon as a tier 1 tuner class car.

It has good acceleration for a tuner, however, being front-wheel drive and possessing a high kerb weight, it can suffer from understeer through corners and also has a low top speed.

The stock Mazdaspeed 3 is unlocked for purchase in the Career mode from the beginning of any career, and it can be purchased from any Car Lot for 30,000 cash.

Neville drives a Mazdaspeed 3 as part of the crew in the tuner career path of the Career mode, if the player drives a tier 1 car.

The Mazdaspeed3 appears in Need for Speed Carbon: Own the City and can be selected as a starter car with a price tag of $18,000.

Its acceleration, handling, and top speed are rated 1.

The Mazdaspeed3 appears in Need for Speed: ProStreet as a tier 2 car with a price tag of $24,000, and is unlocked upon dominating the Showdown: Chicago raceday.

The turbocharged 2.3L inline-four engine of the Mazdaspeed3 produces more torque than other Japanese tier 2 cars such as the Mazda RX-7. It allows the car to accelerate faster and achieve a higher top speed than its rivals, however, due to it having a front-wheel drive configuration, it may be prone to understeer in corners.

It is best utilised in Grip and Speed Challenge. With upgrades, the car can be made competitive against tier 3 cars and have its handling improved.

The Mazdaspeed3 appears in Need for Speed: Undercover as a tier 4 car with a price tag of $52,500. It becomes available in car dealerships once the player reaches Wheelman Level 2.5.

Its main strength is acceleration and is capable of reaching 182 mph (293 km/h), which is an average top speed for a tier 4 car.

The Mazdaspeed3 was made available in Need for Speed: World during the first closed beta test session on March 5, 2010 as a Tier 1 car. Since August 22, 2012, it has been featured as an E class vehicle.

Compared to other starter cars, the Mazdaspeed3 is able to reach the highest top speed, which is 131 mph (211 km/h). Like the Toyota Corolla GT-S, the Mazdaspeed3 has a somewhat weaker acceleration than most Class D vehicles. It also has a weak nitrous boost. Long and wide corners can be passed at high speeds. More difficult variations require the player to brake, since the steering is somewhat influenced by understeer.

It is fitted with various Street quality performance parts from different manufacturers, and an aftermarket lowering kit.

The Orange style is a pack car included as part of the Starter Pack.

The T-Mobile style is a promotional car that could be obtained between September 14, 2010 to June 28, 2011 by entering the code "getconnected" on a T-Mobile website.

The Mazdaspeed3 appears in Need for Speed: Edge. 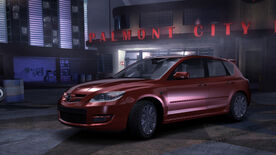 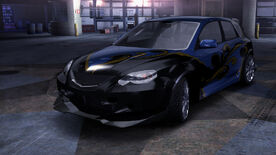 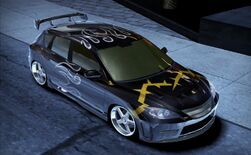 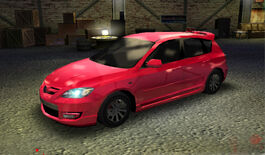 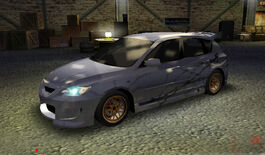 Need for Speed Carbon: Own the City
(Arjen's) 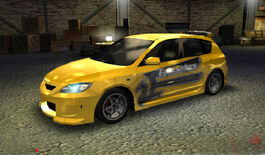 Need for Speed Carbon: Own the City
(West's) 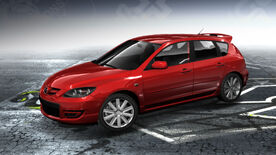 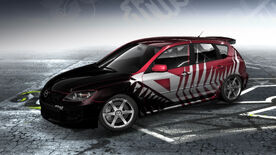 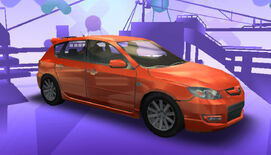 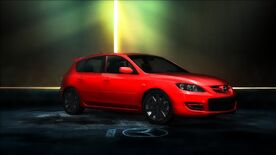 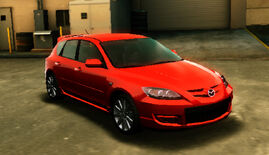 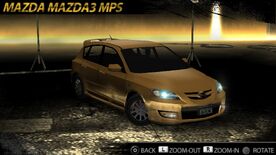 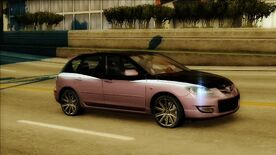 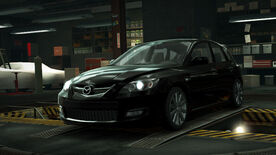 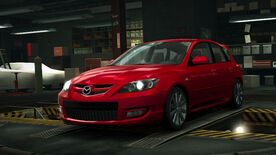 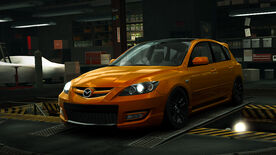 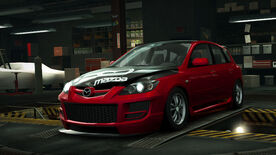 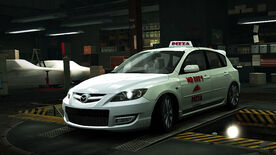