Need for Speed Wiki
Register
Don't have an account?
Sign In
Advertisement
in: Vehicles, 2010s, McLaren,
and 20 more

'MP4' stands for McLaren Project 4, a codename that has been used in McLaren's F1 cars since Project 4 Racing team that was run by the current McLaren CEO Ron Dennis merged with McLaren. '12' is the internal performance rank of the car in the company and 'C' is the abbreviation for Carbonfibre-MonoCell.

The car has a low weight thanks to its carbon fibre composite chassis. McLaren has also integrated advanced techonlogy such as brake steering to reduce understeer. The MP4-12C underwent a revision in 2012.

The MP4-12C appears in Need for Speed: Shift as a tier 4 car with a car rating of 15.80 included as part of the downloadable Exotic Racing Series pack for the PlayStation 3 and Xbox 360 releases.

The MP4-12C appears in Need for Speed: Hot Pursuit (2010) as an Exotic Series racer vehicle, and as an SCPD Speed Enforcement unit.

The handling of the MP4-12C makes it competitive. Players can perform drifts easily with the car and thus gain a lot of nitrous power. It can successfully race against the Lamborghini Reventón but can be outmatched in terms of acceleration. Despite being listed as classified, the top speed for the MP4-12C in Need for Speed: Hot Pursuit (2010) is 208 mph (335 km/h).

The MP4-12C appears in Shift 2: Unleashed as a Modern A class vehicle with an A 1620 performance index rating and 3.88 handling rating. It is unlocked after the player successfully completes the Modern A Invitational Event, but cannot be bought from the car lot.

It can be unstable under heavy cornering. This is especially apparent in the Modern A Invitational Event, where the vehicle must be driven by the player in the Nordschleife. It is recommended not to accelerate in corner entry as it can send too much torque to the rear wheels.

Acceleration-wise, it slightly lacks to the Pagani Zonda F and the all-wheel drive Lamborghini Gallardo LP 560-4, but is able to keep up with its competitors, if driven with caution.

A Speedhunters edition 12C is included with the downloadable Speedhunters Pack. It has an A 1970 performance index rating, can reach a top speed of 219 mph (353 km/h), and has a handling rating of 5.21.

The MP4-12C appears in Need for Speed: Hot Pursuit Remastered as a car tier 4 vehicle available to cops and racers.

It can easily drift through corners and has a powerful nitrous boost, making it well suited to roads with multiple corners, but it can lack with its acceelration.

The MP4-12C is a Exotic Series racer unlocked upon earning 815,000 racer bounty. 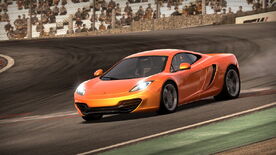 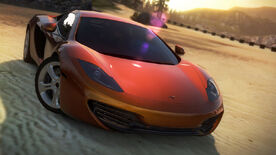 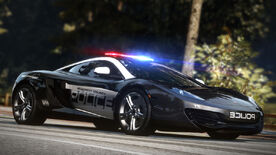