Need for Speed Wiki
Register
Don't have an account?
Sign In
Advertisement
in: Vehicles, Cars, Mercedes-Benz,
and 18 more

[1]
The Mercedes-AMG A 45 4MATIC (W176) is a high-performance trim of the third generation A-Class model range manufactured by Mercedes-Benz.

Improvements to the A 45 AMG, over the base model, include a turbocharged 2-litre inline-4 engine, a DCT 7-speed gearbox, an all-wheel drive system, sport suspension, improved high-performance brakes, an alternative grille design, chrome exhaust tips, and unique AMG alloy wheels.

In 2015, the model range received a facelift, as well as an increased horsepower output, which went on sale in September 2015.

The A 45 appears in Need for Speed: Payback following its reveal during a developer interview on PlayStation Live's day 2 coverage of E3 2017 on June 14, 2017, and was later shown in an off-road race gameplay video[2] released on August 30, 2017.

It is unlocked for purchase from the drag, off-road, race, and runner class dealerships upon completing three questlines in chapter 3 - City Lights. 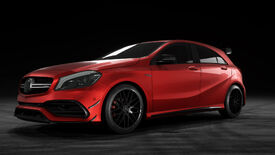 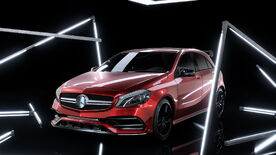 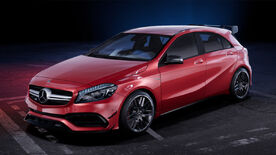