Need for Speed Wiki
Register
Don't have an account?
Sign In
Advertisement
in: Vehicles, 2000s, Mercedes-Benz,
and 22 more

It was altered with a number of body redesigns, performance improvements, and special edition models during its production which lasted from 2003 to 2010. This included the 722 Edition and the Stirling Moss Edition.

The 5.4L engine is a 232kg SOHC V8 unit that is entirely hand crafted out of aluminium and fitted with a Lysholm-type twin-screw supercharger that rotates at 23,000 rpm to produce 13 PSI of boost.

The SLR is equipped with carbon-ceramic brake discs to provide better stopping power as well as provide fade resistance up to 1,200°C and an automatic air brake that provides up to an additional 90% of total aerodynamic drag.

The SLR appears in Need for Speed: Most Wanted.

It has a lower top speed and worse handling compared to other high-end cars, but compensates with superior acceleration and much better pursuit durability, when fully upgraded.

The stock SLR McLaren is unlocked through the Career mode upon the player defeating Blacklist Rival #3: Ronald "Ronnie" McCrea.

Upon being unlocked, it can be purchased in the Career mode from a Car Lot for 300,000 cash, and it can be selected for customisation in My Cars.

Toru "Bull" Sato drives a customised SLR McLaren, which is made available as a Bonus car for use in Quick Race or multiplayer after he is defeated in the Career mode. It can not be selected for customisation in My Cars.

It can be added to the player's garage in the Career mode as a possible pink slip reward from one of three mystery Bonus Markers offered after defeating Blacklist Rival #2: Toru "Bull" Sato.

A custom SLR McLaren is offered in the Challenge Series and can be driven in two events:

The SLR McLaren appears in Need for Speed: Carbon as a tier 3 exotic class car.

Its weakness lies in its handling, as it understeers a little due to its weight. It comes with a very high top speed coupled with quick acceleration. Its weight does, however, make it effective in pursuits.

The stock SLR McLaren is unlocked for purchase in the Career mode depending on the player's chosen career path:

The SLR appears in the PlayStation 2 and Nintendo Wii releases of Need for Speed: Undercover, with a price tag of $150,000. It can be unlocked through career progression. 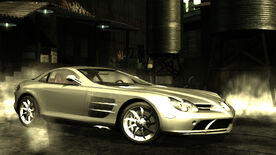 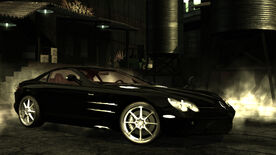 Need for Speed: Most Wanted
(Bull's) 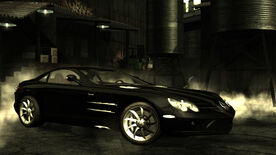 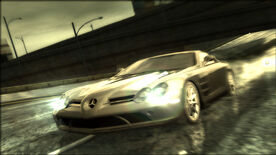 Need for Speed: Most Wanted
(Promotional) 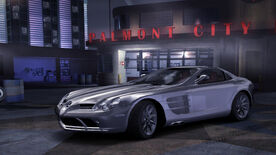 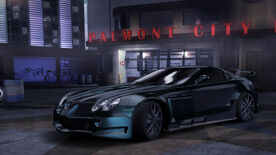 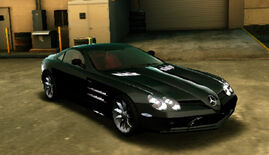