Need for Speed Wiki
Register
Don't have an account?
Sign In
Advertisement
in: Vehicles, 2000s, Mercedes-Benz,
and 15 more

Its design was inspired by the 1955 Mercedes-Benz 300SLR racing car and became the last SLR model to be produced by McLaren with Mercedes-Benz.

The Stirling Moss Edition appears in Need for Speed: Shift as part of the downloadable Exotic Racing pack for the PlayStation 3 and Xbox 360 releases, which was made available on March 18, 2010.

The SLR Stirling Moss was made available in Need for Speed: World on July 26, 2013 as an A class car.

The Stirling Moss appears in Need for Speed: Hot Pursuit (2010) as an Exotic Series racer vehicle.

The racer vehicle is unlocked upon the player earning a total of 521,250 racer bounty.

It has a high top speed alongside the Pagani Zonda Cinque and acceleration which is up on par with the Chevrolet Corvette ZR1. The Stirling Moss is one of the best cars in its class because of these perks, along with its strong nitrous and responsive handling. 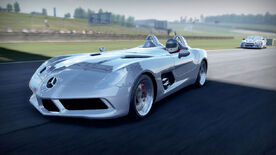 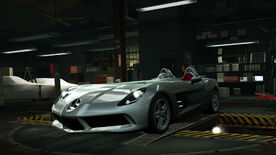 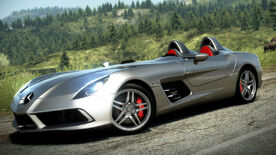 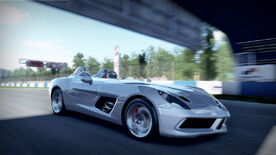 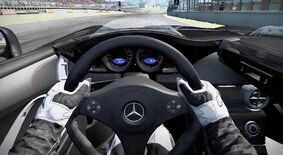