1620 kg (3571 lbs)
The Mercedes-Benz SLS AMG is a grand tourer produced by Mercedes-Benz's AMG division that entered production in 2010.

The powerplant of the SLS AMG is an M159 6.2L V8 engine which is based on the M156 engine. It is the first car that was developed independently by AMG and the chassis and body were the first aluminium construction ever made by Mercedes-Benz.

The car received several variants throughout its lifespan, including a more hardcore Black Series and an all-electric, all-wheel-drive Electric Drive. Production of the SLS ended in 2014 after 350 units of the GT Final Edition variant rolled off the production line. The SLS AMG was succeeded by the Mercedes-AMG GT.

The SLS AMG appears in Need for Speed: Hot Pursuit (2010) as a Super Series racer vehicle, and as an SCPD Rapid Deployment unit.

The car can reach a higher top speed than the Porsche 911 GT3 RS although it doesn't handle as well due to its heavier weight.

The SLS AMG fares well in Pursuits compared to other cars in its category due to its durability.

The downloadable Speedhunters pack also features a "Speedhunters" variant of the car, which has a A 1500 performance rating and 4.86 handling rating.

The SLS AMG appears as a tier 4 car in Need for Speed: The Run. It is unlocked upon receiving a Bronze Medal in all Windy City Challenges.

It has above average acceleration and top speed at the cost of handling which is rated "Challenging."

The Old Spice signature edition is an Old Spice themed variant of the SLS AMG that was only featured in the Old Spice 'Smell Faster' Pack. It appears as a tier 4 car and has identical performance to the standard variant.

The Bling signature edition is a tier 5 car that is unlocked upon reaching Driver Level 27.

The NFS Edition is a tier 5 car that is unlocked upon beating beating 30 Autolog recommendations.

The SLS AMG appears in Need for Speed: Most Wanted (2012) as a Grand Tourer class car that can be found at various Jack Spots throughout Fairhaven City. It is unlocked upon reaching SpeedLevel 11 in multiplayer.

It is featured with powerful acceleration that is up on par with the fastest Sports class cars such as the Lamborghini Gallardo LP 570-4 Spyder Performante alongside a high top speed comparable to the Bentley Continental Supersports ISR Convertible. The handling of the SLS is prone to oversteer but easy to control, making it suitable for long drifts.

The Mercedes-Benz SLS AMG appears in the mobile release of Need for Speed: Most Wanted (2012) in the GT category. It boasts balanced stats with slightly higher acceleration and speed in its category and costs $350,000.

A NFS Edition that improves the car in every performance aspect can be purchased for $600,000.

The SLS AMG appears in Need for Speed: Hot Pursuit Remastered as a car tier 3 vehicle available to cops and racers.

It has a high top speed and is very durable, but has poor handling.

The SLS AMG is a Super Series racer unlocked upon earning 427,500 racer bounty. 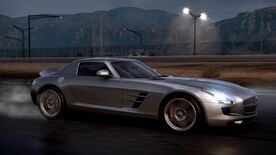 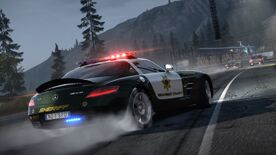 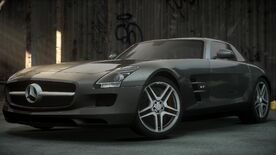 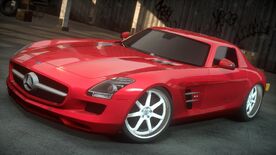 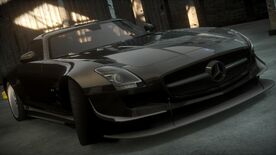 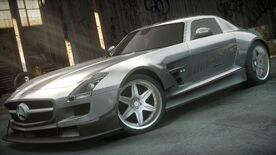 Need for Speed: The Run
(Bling) 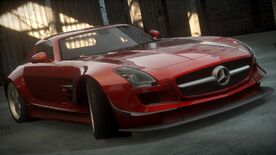 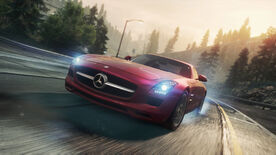 Retrieved from "https://nfs.fandom.com/wiki/Mercedes-Benz_SLS_AMG?oldid=147925"
Community content is available under CC-BY-SA unless otherwise noted.