1550 kg (3417 lbs)
The Mercedes-Benz SLS AMG Black Series is a track-oriented variant of the SLS AMG from the AMG division of Mercedes-Benz.

The standout features of the SLS AMG Black Series include an upgraded engine which now produces 60 bhp more than the standard SLS V8 and has an 8,000 rpm redline.

Additional alterations include an aerodynamic package inspired by the SLS AMG GT3 race car, reduction in weight with extensive use of carbon-fibre and titanium parts, and an electronic limited-slip differential in place of a mechanical one found in the standard model.

The SLS AMG Black Series appears in Need for Speed: Rivals as a racer vehicle following its reveal from a contest held by the official Need for Speed Facebook feed on May 24, 2013.

The powerful V8 gives the SLS Black great acceleration and an impressive top speed, but it can feel bulky and is prone to unresponsive steering. The SLS becomes easier to drive after installing handling upgrades, and can be used to drift around corners with ease.

It is unlocked for the racer faction upon the player completing any of the SpeedLists offered at rank 6. Once unlocked, it can be purchased for 57,500 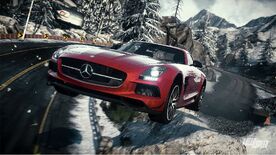 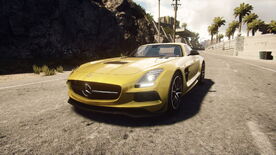 Need for Speed: Edge
Retrieved from "https://nfs.fandom.com/wiki/Mercedes-Benz_SLS_AMG_Black_Series?oldid=140556"
Community content is available under CC-BY-SA unless otherwise noted.