Need for Speed Wiki
Register
Don't have an account?
Sign In
Advertisement
in: Vehicles, Cars, Mercedes-Benz,
and 11 more
English

The SL is a series of luxury sport roadsters from Mercedes Benz. Compared to the flagship S series saloons, the SL is lighter and generally more sports-oriented, sharing the same high-power engines built in-house by Mercedes.

Over its production run, the series saw several design changes. For example, digital odometer was introduced in 1994, and the automatic-triggered rain brush in 1995. AMG offered several customised R129 models, including the SL 55, 60, 70, 72, and 73. Some of these are limited editions and are extremely rare and prohibitively expensive.

In compliance with German law, all SL models were electronically limited to a top speed of 155 mph (250 km/h).

The M120 V12 engine equipped in SL600 was widely regarded as one of the finest automobile engine ever made. In its stock form, with around 400 horsepower (reduced to 389 later in compliance of emission regulations), it can push the 2-tonne car to around 290 km/h with the speed limiter removed. Heavily-modified and racing-tuned M120s are equipped in supercars like Mercedes CLK-GTRs and Pagani Zondas, demonstrating the engine's true potential: an outrageous 750+ horsepower.

The SL 600 appears in the PC release of Need for Speed III: Hot Pursuit as a class C car.

Overall, it is the best car in its class. With its powerful V12 engine, it easily outperforms the Jaguar XK8 and Aston Martin DB7 in both acceleration and top speed. Thanks to its advanced traction system, handling is not compromised much for such a heavy car.

The SL600 is not available in Hot Pursuit mode. 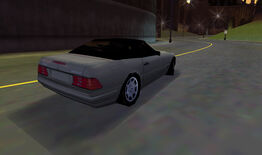