Need for Speed Wiki
Register
Don't have an account?
Sign In
Advertisement
in: Vehicles, 2010s, Mini,
and 18 more

6-speed Manual
1,540 kg (3,395 lbs)
The 2017 Mini John Cooper Works Countryman (F60) is an all-wheel drive crossover based on the second generation Cooper Countryman ALL4, and was built from February 2017 to August 2018 by BMW under the Mini marque at the VDL Nedcar factory in Born, Netherlands.

First shown at the 2017 Auto Shangai motor show, it was revealed with extra chassis alterations to meet its off-road design, and the ALL4 drivetrain allows it to switch from front-wheel drive to all-wheel drive with a clutch pack that activates along the rear axle.

It is a speedier and more capable off-road model of the second generation Mini Countryman ALL4, as it is fitted with an improved 2-litre inline-four engine developing more torque, bigger wheels, a set of four-piston Brembo calipers, and an optional 6-speed manual gearbox.

Equipped with air inlets to cool the engine and brakes and a red grille outline, the JCW Countryman is built for performance, including its 18" five-spoke JCW alloy wheels and sport seats.

The JCW Countryman appears in Need for Speed: Payback as a downloadable add-on that was made available with the February Update released on February 13, 2018.

It is unlocked for purchase from the speedcross class dealership after purchasing the Speedcross Story Bundle and defeating Barracuda at the end of the Mac: Speedcross questline.

The JCW Countryman '17 appears in Need for Speed: Heat following an article published[1][2] on August 19, 2019, revealing it to be part of the game's official car list, and appears in the NFS: Heat Studio app as part of container 1, which was included with the release of the app. 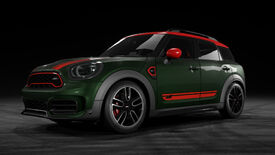 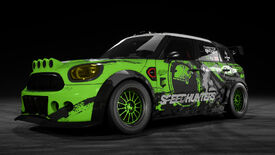 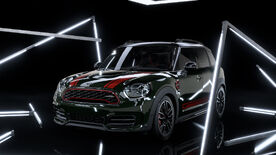 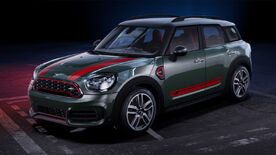