Need for Speed Wiki
Register
Don't have an account?
Sign In
Advertisement
in: Vehicles, 1990s, Mitsubishi,
and 13 more

The 3000GT competed with other Japanese technological forerunners of the 1990s such as the Acura NSX and Toyota Supra. It was also sold under Chrysler's Dodge brand as the Dodge Stealth.

The 3000GT was regularly updated with changes to its exterior design, with its final update being applied in 1999, the final year of export model sales. Japanese GTO models were manufactured until 2001.[2]

The 3000GT VR-4 appears in Need for Speed: Underground 2 and is unlocked upon completing URL event 12 during career stage 4.

The all-wheel drive system and twin turbo V6 give the 3000GT VR-4 a high top speed and quick acceleration, although said performance aspects also come with drawbacks in handling due to a high weight.

The 3000GT VR-4 is a classic sports class car that requires 40 common blueprints to unlock. The blueprints required to unlock the vehicle can be found from various sources: 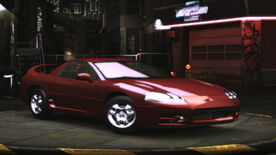