Need for Speed Wiki
Register
Don't have an account?
Sign In
Advertisement
in: Vehicles, Cars, Mitsubishi,
and 12 more

The Lancer ES is unlocked in Need for Speed: Underground after completing Underground Mode event 4.

Its best trait is its acceleration as it has an average top speed and slightly difficult handling due to a front-wheel drivetrain. The Subaru Impreza 2.5 RS is better in corners, but inferior in terms of other performance characteristics.

The Eastsiders member Todd drives a Lancer ES during an early stage of the Underground Mode and swaps it for a Mitsubishi Eclipse GSX later on.

The Lancer ES can be found in the game files of Need for Speed: Underground 2 with vinyl, manufacturer and secondary logo textures referencing the car. 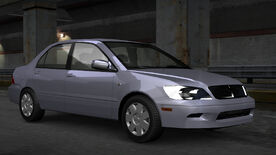 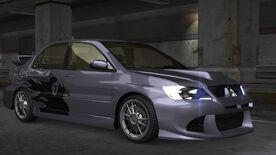