Need for Speed Wiki
Register
Don't have an account?
Sign In
Advertisement
in: Vehicles, 2000s, Mitsubishi,
and 13 more

It is fitted with components from the GSR trim offered in North America; Bilstein shocks, leather Recaro seats, a rear diffuser, 17" Enkei wheels, and plastic spoiler uprights. Upgrades offered with the FQ-300, on top of the GSR equipment, include a 6-speed transmission and an active yaw control system.

The FQ-300 trim was offered from July 2005 to December 2006, at which point it was discontinued leading into the final production year of the Evolution IX.

The Evolution IX MR-edition appears in Need for Speed: Shift as a tier 2 car with a price of $50,000. Similar to every other tier 2 car, it is required to collect 30 Stars to unlock the car.

The Lancer Evolution has a 5.90 car rating. Its braking and handling capabilities are impressive in technical corners. It has a decent acceleration, which is better than that of the Mitsubishi Lancer Evolution X and useful exiting corners quickly.

However, the engine performance of the Lancer Evolution does appear to slightly lack in comparison with the Subaru Impreza WRX STI. The WRX STI utilises its advantage of power at the cost of less traction though.

The Speedhunters Lancer Evolution is a Modern Road class car, included as part of the downloadable Speedhunters Pack, that has a A 1910 performance rating and a 4.91 handling rating. Top speed of the car is 201 mph (324 kph), and it goes from 0-60 mph in 3.13 seconds. 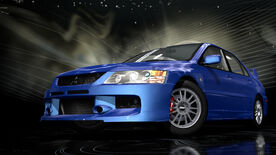