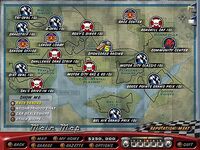 Bel Air Island is an island district within Motor City, found to the south of the region. The island features an enclosed race track passing the Parkway Island amusement park, marinas, and small towns.

The Bel Air Grand Prix is the only course that takes place on the island.

Bonneville is the downtown district of Motor City, found to the north-east of the region. It is comprised of city streets, narrow alleyways, and tight turns. The district is named in reference to the Bonneville Speedway found on the Bonneville Salt Flats near Wendover, Utah.

Continental Parkway is an industrial complex found in the centre of Motor City. It is comprised of various warehouses, a smelting foundry, a scrapyard, shipping docks, and complex industrial roads.

Industrial Flats, The Foundry, The Loading Docks, and The Scrap Yard take place within this district.

Fairlane Square is a district near the centre of the Motor City region. It comprises of city roads passing modern skyscrapers, old red brick warehouses, highway overpasses, an airport terminal, a runway, and tunnels.

Motor City Classic is the only course that takes place in the district.

Gastown, Redlight District, The Spillway, and Thunderbird Alley take place within this district.

Gearborne and the Racing Complex appear to the west of the Motor City region. The district is made up of several closed course routes featuring both tarmac and dirt configurations. The district references to the General Motors Proving Grounds near Detroit, Michigan, USA.

The Goose Point Grand Prix is the only course featured in the area.

Traylor Heights is a countryside district found to the west of the Motor City region. The district featured many dirt roads as well as Skoggit County Road, Hickey's Drive-In Theatre, Sanders Park Golf Course, and a tornado.