Need for Speed Wiki
Register
Don't have an account?
Sign In
Advertisement
in: Games, Need for Speed Series, PC (Game),
and 17 more
English

Need for Speed: Heat is the twenty-ninth game in the Need for Speed series, and the fourth developed by Ghost Games.

It was announced by publisher Electronic Arts to be released for PC, PlayStation 4, and Xbox One on November 8, 2019. An earlier 10-hour trial release date of November 5, 2019 was outlined alongside the reveal for EA Access through PlayStation 4 and Xbox One, as well as Origin Access for PC on the same date.[1] Those with an Origin Access Premier subscription for PC can play the full Deluxe Edition release of Need for Speed: Heat, which was made available on November 5, 2019.

The name of the 2019 game was revealed on August 14, 2019 with a reveal trailer showing the setting, a contrast of legitimate and illegal racing, the presence of police, and unique player avatars. The official Need for Speed website was also updated with a second countdown timer, which ended on August 19, 2019 at 8pm (BST) / 12pm (PDT) / 7pm (UTC), and concluded with the release of a gameplay trailer during the Gamescom Opening Night Live event.

The story follows the player participating in the Speedhunters Showdown, an organised racing event held on the streets and surrounding countryside of Palm City.

The player ascends through the Speedhunters Showdown, earning bank and fame for their legitimate racing; and through the Palm City underground racing scene, earning a reputation and notoriety for their illegal street racing.

Campaign missions are story centred events that occur as the player proceeds through the Speedhunters Showdown and as they reach higher Rep Levels racing at night.

Driving Stories are side-story centred events that are unlocked alongside campaign missions, but focus on characters outside of the main narrative. They can appear during the day or night, and reward rep as well as bank.

The career allows players to take a role of their own avatar in Palm City, a fictional representation of the Southeastern United States, with Miami, Florida taking precedence, and that they can participate in various forms of racing.

Players can invite others to join their party, with up to 8 players in a party within a single AllDrive session.

Players can participate in pursuits together in freeroam by being in proximity of each other and the PCPD.

Invites can be sent server-wide or to the player's current party by pulling up to an event and sending the desired invite through an onscreen prompt.

The event types available are offered during both day and night, with the rewards offered differing between the two time periods.

During the day, players earn bank (

) from participating in events hosted by the Speedhunters Showdown.

During the night, players earn rep (

) from participating in illicit street racing events and engaging with the PCPD.

The Speedhunters Showdown is a sanctioned racing competition that can be entered during the day. As a legitimate racing event, players can earn bank to customise and upgrade their cars.

Pursuits can be engaged with the PCPD, but their tactics and ability to escalate a pursuit is limited during the day.

Bank earned can be used to purchase cars, improve car performance with parts, and modify cars through visual customisation.

Underground racing is an illegal racing competition that can be entered at night. As an illicit form of racing, players can earn rep to level up their avatar.

Racing during the night will attract the attention of a rogue police task force that patrols the streets of Palm City. They're tasked with shutting down street racing in Palm City, which can lead players to risk their earned rep against the police or lose their earnings in handcuffs.

Driving at night will result in the player being noticed by the PCPD's task force and will result in their vehicle being allocated a heat level. Reaching higher heat levels from engaging with the police will act as a multiplier for earned rep during the current night session, and can only be earned by reaching a safehouse or owned garage.

Being busted by the PCPD will end the player's current night session and they will only be rewarded their earned rep without any multiplier.

High Heat (HH) events require the player to be at a certain heat level before they are permitted to enter.

They typically feature a more pronounced police presence that allows the player to unlock Ultimate and Ultimate+ performance parts, but they will have to win the event and evade the police to unlock the part for all cars.

Pursuits in Palm City can take place during day or night, but the PCPD's response to a pursuit differs depending on the time period. Players earn rep from participating in pursuits, with great amounts offered during night than day.

Day time pursuits limit the PCPD's available tactics, their ability to escalate a pursuit, and their options for apprehending a street racer.

Night time is handled by a task force lead by Lieutenant Mercer and is funded by the PCPD. The tactics, resources, and options utilised by the task force is not limited, with Lt. Mercer authorising any force required, as they're not held to the same discretion as their day time patrolling officers.

Police will not intervene with a sanctioned day event, but will step in to any night time events, and will continue to pursue any street racers after the event has ended.

Both players and PCPD units have a strength bar, which will indicate the structural integrity of their vehicle. Any vehicle that completely depletes their strength bar will 'wreck'; wrecked police units will leave a pursuit, but a wrecked player will be busted.

A heat level represents the pursuit condition a street racer's vehicle should be treated with; 1 being the lowest engagement and 5 being the highest engagement. Each heat level also equates to the amount a player's earned rep for a current night session will be multiplied by, should they successfully reach a safehouse or garage.

Escaping a pursuit will trigger a cooldown state, in which the player has to elude the police long enough for a pursuit to disband. Evading a pursuit during the day will reset a player's heat level, although at night the player's car will retain their current heat level.

Evading a pursuit will allow the player to successfully complete their night session by entering either a safehouse or an owned garage.

While escaping means that a player is no longer being pursued by the PCPD, it does not mean they have be awarded their earned rep. Their earned rep isn't awarded to them until they reach a safehouse or owned garage, which will also end their current night session.

Busted is when a player has been pinned by PCPD units for a certain amount of time, is completely immobilised during a pursuit, or has depleted their strength bar.

Cars can be driven at either during the day, to participate in Speedhunters Showdown events, or at night, to participate in illegal street racing. The car driven by the player has a strength bar that can deplete through collisions with the world, other racers, or the police.

Cars can be purchased for bank and each can be customised using visual components or performance parts.

Cars are unlocked as players progress through, and increase, their Rep Level by earning rep at night, and special edition cars can be unlocked with certain downloadable content packs or through specific events.

Paint & Wrap allows for the colour, material, effect, coat, and any decals applied to a car's bodywork to be altered.

The base colour of the bodywork paint for a car can be selected with sliders ranging from 0 to 100 for three aspects to make up its HSL colour:

The specifications of the bodywork paint for a car can be selected with options from three fields:

The wrap option allows players to apply up to 80 decals to each individual section of a car:

Vanity items can be bought with bank and equipped to cars, as well as altering the colour and pattern of underglow.

Stance Tuning allows for the camber and ride height of a car to be altered:

Exhaust Sound allows for the sound emitted from a vehicle's exhaust to be altered as each option offers an adjustable slider across two options with stock being in between either:

Performance Parts allow players to improve the performance of their cars through various means including bespoke components and engine swaps.

Performance parts can be purchased with bank or from winning events. These parts can be unlocked by reaching higher reputation levels through earning rep and successfully evading police following a high heat event.

Players can swap performance parts whilst in AllDrive by using a Live Tuning menu. The menu can be used to swap installed performance parts with other owned parts for individual cars, and can allow players to experiment with performance tuning of their cars without having to continually visit a garage.

The player's character can be selected from the beginning of the career, and swapped for another at any point through their garage.

An avatar is used to represent the player's character in-game; during races and cutscene animatics and they can be swapped from a pool of pre-made characters.

Players are be able to select an avatar to use as their character throughout the career from a selection of pre-made avatar options.

There are twelve available avatars, made up of varying ethnicity and cultural backgrounds, with both male and female represented.

Avatars can be customised with various items of clothing and outfits.

There are five aspects of an avatar than can be customised:

Hairstyles can also have their colour modified through an additional editor:

Palm City is a fictional representation of south-east United States, with inspiration coming from two states in particular; Florida and Georgia, and can be explored during either during the day or at night.

Multiple downloadable content packs and bundles will be made available for Need for Speed: Heat following its release.

This includes car packs and a time savers pack for collectables scattered around Palm City.

A couple of comments made by Ben Walke, the Global Community Engagement Manager at Electronic Arts, noted that Need for Speed: Heat would not feature any loot boxes or "surprise mechanics[5]", and that there would be post-launch car packs released as paid-for downloadable content.

The soundtrack features various songs, with electronic and urban being big influences, as well as different influences such as the local vibe of the area. The day has a relaxed vibe outside of racing, and night has more dangerous tones.[7]

The reveal trailer featured "Redlight" by NGHTMRE & A$AP Ferg and was remixed by 2WEI.[8]

A list of licenced songs appearing in-game was published to the official Need for Speed website on October 31, 2019[9], as well as revealing an original score composed by Pedro Bromfman.

Leading up to the release of Need for Speed: Heat, a series of announcements, rumours, leaks, and hints of the game came to surface preceding its official reveal on August 14, 2019. 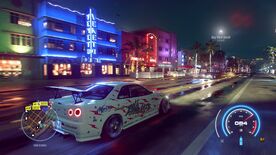 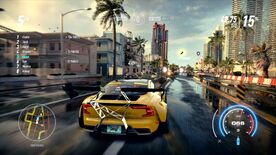 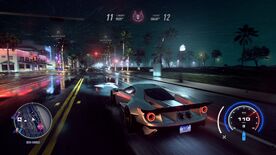 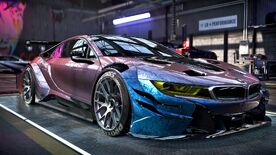 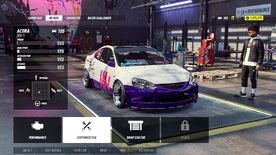 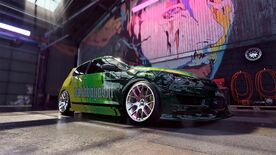 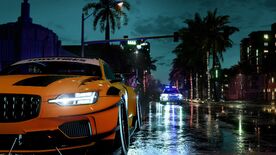 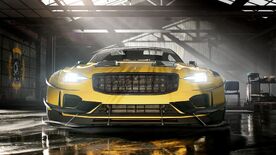 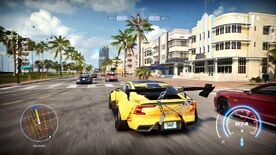 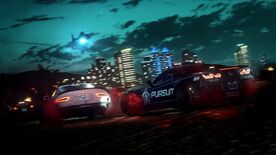 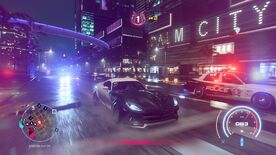 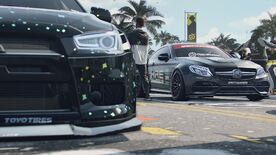 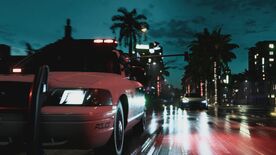 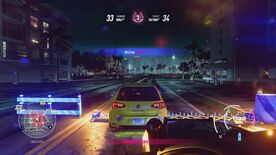 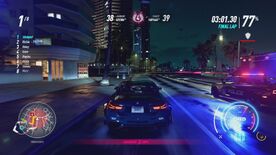 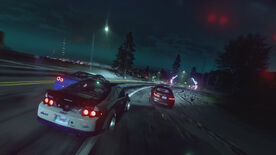 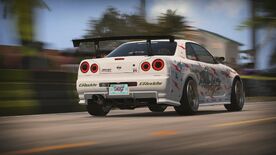 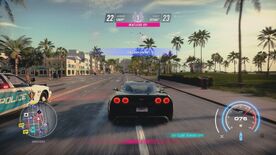 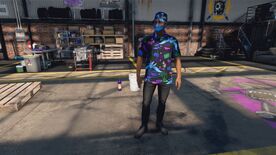 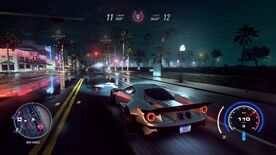 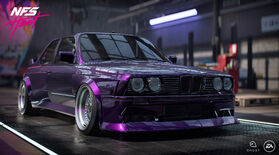 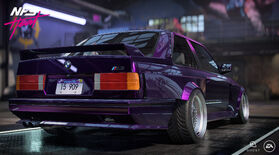 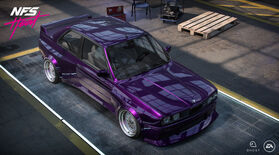 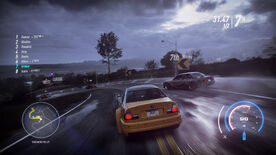 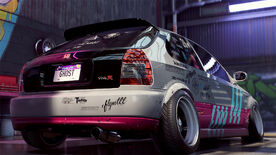 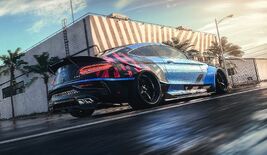