Performance Parts in Need for Speed: Heat are used to improve the performance level, ratings, and handling profile of cars.

The parts offered to each car are divided into four sections; engine, chassis, drivetrain, and auxiliary. Each category has a differing affect of the performance ratings of a car.

Owned parts can be removed from cars and equipped to others owned by the player. Parts that are owned but haven't been equipped to a car are stored under the inventory section of the parts selection menu.

The Part Shop is unlocked upon completing the "Make A Name" mission in chapter 1 of the campaign story, although the player is also able to apply performance parts at the garage.

Equipping higher rated parts will increase a car's performance rating from its stock value to its highest rating cap. The stock rating and the performance cap is different for each car, and may require the player to swap the engine of a car before it is capable of reaching a higher performance cap.

The performance rating for all cars is between 100 to 399, and any cars exceeding that are rated as 400+.

The overall performance rating of a car is derived from three of its four stats; power, high speed, and acceleration. These statistics can also be viewed as a car's current horsepower, 0-60 mph in seconds, its max torque, and its top speed.

Nitrous is also rating but doesn't affect the car's overall rating, as its rating only shows the potency of the fitted nitrous part.

The quality of a part refers to its likely performance increase to a car:

A "volatile part" refers to a part that the player has won from an High Heat event during the night. These parts are unlocked by winning an High Heat event and successfully returning to the garage or a safe house without being busted by the Palm City Police Department.

The quality of a "volatile part" won from a High Heat event differs depending on the player's current reputation level, as they can unlock some parts earlier than their current rep level allows or ultimate parts that can only be unlocked from High Heat events upon reaching the highest rep levels. 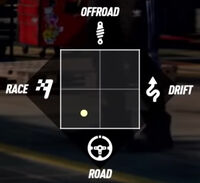 The handling profile represents a car's suspension and handling traits, with each quarter highlighting a car's bias towards a grip or drift and predisposes either an on-road or off-road setup.

Chassis and drivetrain parts will alter the handling characteristics of a car, which is represented as a Cartesian graph.

Within live tuning, player can alter four aspects of their current car:

Parts can be purchased from either the garage or during the day at the Part Shop near the Palm City Raceway.

The Part Shop section of the parts selection menu lists currently available parts and parts the player can unlock. These parts are purchased using the player's earned bank and equipped to a car after purchase.

The inventory section of the parts selection menu lists currently owned parts that haven't been equipped to a car. These parts are either already owned or won from an event.

The performance menu, found within the garage section of the pause menu, allows players to swap the equipped parts of their current car in free roam. The available selection of parts they can swap is limited to parts found in the player's inventory menu, with the exception of the active auxiliary part.

Owned parts can be sold for bank. Once sold, they will need to be repurchased through the Part Shop section of the parts selection menu before they can be equipped. The selling price of parts is lower than their purchase price.

The engine section includes parts used for improving the power, high speed, acceleration, and nitrous statistics of a car. Parts equipped under the engine section are attached to the currently fitted engine, and are stored under the inventory menu with that engine should the player performance an engine swap.

The crankshaft converts energy from the engine into torque. An improved crankshaft decreases losses and can withstand the higher forces of a more powerful engine.

The ECU controls all the electronics in the engine. A better ECU can work faster, resulting in higher power output from the engine.

The cooling system transports heat away from the fine to the air around the vehicle. Improving cooling means that the engine can produce more power without overheating.

The exhaust system evacuates hot gases from the combustion chamber. The more efficiently these gases can be vented, the more fresh air can be taken in during the next combustion cycle.

A forced induction system can be used to increase power at certain points across the rev range.

Nitrous, when activated, adds extra air and fuel into the engine, giving an instant power boost.

Performing an engine swap will remove the currently installed engine and replace it with any other optional engines offered to the player for their current car.

The chassis section includes parts used for altering the Handling Profile of a car and the acceleration statistic.

Suspension alters the handling through offering setups with advantages and disadvantages for certain situations.

Tyres alter the handling through offering setups with characteristics for certain situations.

The Drivetrain section includes parts used for altering the Handling Profile of a car, as well as altering the high speed and acceleration statistics.

The clutch connects the engine and gearbox. Improving the clutch will reduce the shifting time resulting in better acceleration.

Changes the number of gears the car has. The optimal amount of gears varies from engine to engine and car to car, but also on how the vehicle is being used.

Differential alters the handling through offering setups with advantages and disadvantages for certain situations.

The auxiliary section includes parts that can assist the player as they're driving around Palm City, during either the day or night, with one being activated by the player and another for passive usage during driving.

Equip active auxiliary items to set up a car for high-speed racing or intense police pursuits. These items will need to be fired manually.

Equip passive auxiliary items to set up a car for high-speed racing or intense police pursuits.